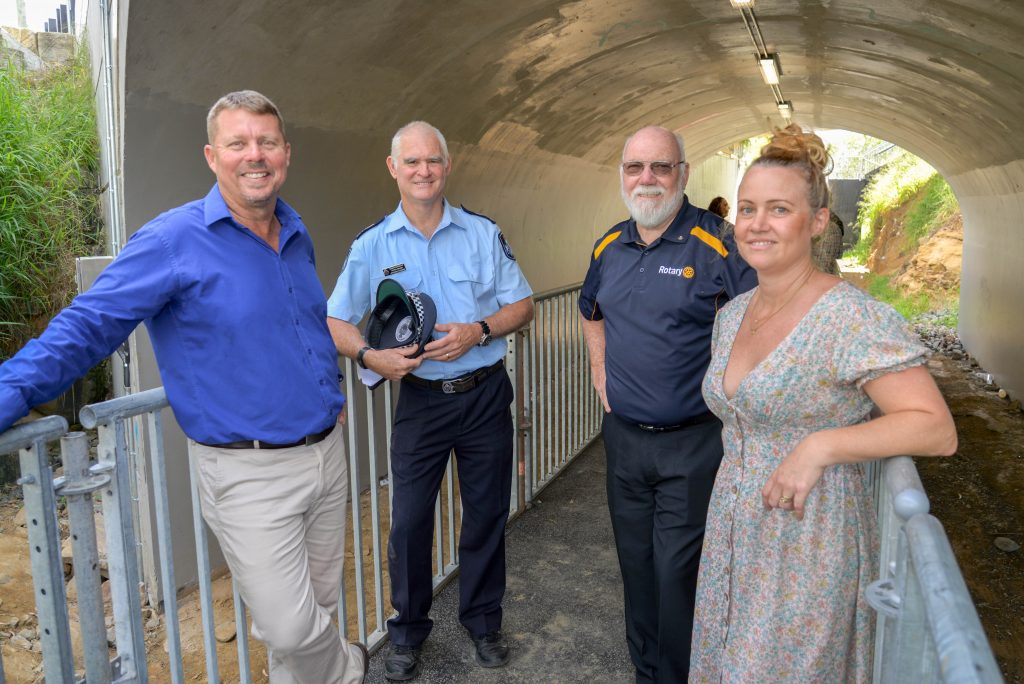 The new crossing links Ann Street on the eastern side of the highway with Cusack
Lane and the Town Centre on the western side.

The Jimboomba Safe Crossing utilises the former Beaudesert railway underpass
which has been revitalised with pathway decking, railings, lighting and safety
cameras.

The opening of the Safe Crossing is an outcome from the 2019 Council-run
Jimboomba Summit.

“Our vision is to develop and improve Jimboomba Town Centre to suit the many
lifestyles of the local community,” Cr Raven said.

“This safe pedestrian connection between the two sides of the highway is a major
step towards achieving that goal.

“In repurposing the old rail corridor, we have not only provided a safe pathway for
pedestrians but we have also help reconnect many residents to the Town Centre.”
The Safe Crossing has been built as a temporary structure to allow for a more
permanent pathway as part of the proposed Department of Transport and Main
Roads’ upgrade of the Mount Lindesay Highway.

Division 9 Councillor Scott Bannan said the project was the start of a new era for
Jimboomba.

“This is the first of a number of local projects funded over the next two years that
reflect feedback from residents, business owners and community groups at the
Jimboomba Summit,” Cr Bannan said.

“The projects are all designed to stimulate growth, improve connectivity and revitalise the Town Centre for investors, visitors and our local community.”

Other planned improvements for the Town Centre under the Jimboomba
Implementation Plan include:
• More options for footpath dining
• Decorative lighting for Cusack Lane and other nearby streets
• Development of a Place Activation and Night Time Economy Strategy
• Formulation of a Streetscape Masterplan

A further $2.59 million was allocated in last year’s Budget for development of the
Jimboomba Park Master Plan which includes the delivery of a rugby league and
touch football clubhouse.

The latest works follow on from a number of other Council-fund improvements in
Jimboomba Park over the past 10 years.

These include a netball clubhouse and amenities block and six sealed courts, change
rooms and a referees’ room along with a new field for the rugby league club and
relocation of the pony club to a site featuring an undercover dressage area, showjumping arena and clubhouse.