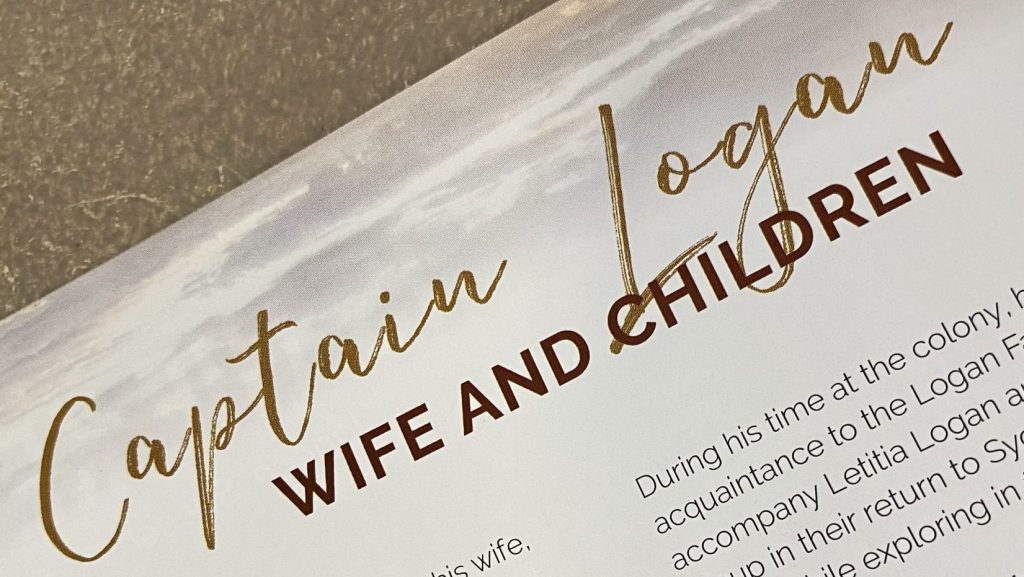 The Wife and Children of Captain Logan

In September 1823, the couple were married at St John’s Church, Sligo.

As the daughter of a fellow officer, Letitia Anne O’Beirne was familiar with life and role expected of a military wife.

In June 1824, Logan and his very pregnant wife, Letitia, returned to England. A month later, Letitia gave birth to their son, Robert Abraham.

When Logan and his regiment were ordered to New South Wales, the small family and Letitia’s sister, Hannah Charlotte, set sail for Sydney on the convict transport Hooghly, eventually docking in Sydney on 22 April 1825. The family spent a year in Sydney before Logan was posted to Moreton Bay in 1826. During this time, the couple had a daughter, Letitia, who was born in the colony.

As the senior officer, Logan was placed in charge as Commandant of the Moreton Bay Penal Settlement. Logan spent the next year establishing the settlement by erecting permanent buildings and creating structure.

Assistant Surgeon Murray, assistant to the Doctor of the colony when Captain Logan was in command, Dr Cowper, often wrote about his experiences in the colony. These documents are still around today and one of the few accounts we have of Captain Logan’s wife.

On one occasion, he wrote to his sister about Letitia Logan, describing her as “a very nice woman who could not have been kinder and more attentive”, also stating that he always enjoyed his visits to the cottage.

During his time at the colony, he became a close acquaintance to the Logan Family. Deciding to accompany Letitia Logan and her small family group in their return to Sydney, following Logan’s death while exploring in the Brisbane Valley.